The great cosmic calendar is turning. The great cosmic spiral has come almost full circle, and the Energy of the Divine Mother is returning on Earth. Climbing Romania’s sacred mountains, we discover traces of ancient cultures which honoured the Mother Goddess in various forms. Informed like crystals, the zoomorphic megaliths on Ceahlău Mountain are guarding the energetic centers of the mountain, waiting to be intentionally activated by us, with our love.

If we climb the mountain and pass the Dochia chalet, in front of the camping ground we find a rock formation, half-hidden by a layer of turf and moss. The megalith attracted me like a magnet and when I touched it, it triggered a vision. I saw a green net holding in it all forms of life on our planet, and I felt the Mother’s Love like a powerful yet soft energy which made me cry because of the difference of vibration between the turtle’s high energy and my daily vibration. In front of the turtle I saw a stone ledge on which offerings were made, and a few meters away there was a stone that looked like a cross-section of the womb of a woman giving birth. In legendary times women used to give birth here ritualistically. In those times they used to have rituals in which they worhipped the Mother Goddess and Mother Earth.

In a regression/meditation I saw that when the Mother’s rituals were performed in this place, the vegetation was tropical. The whole plateau where the camping ground is today, used to be a sanctuary dedicated to the Mother. The area between the Turtle and the Sitting Ram used to be a sanctuary and nobody was allowed to cross it the way we do today, when there is a path crossing right through the middle of the sanctuary.

The South American archeologist Daniel Ruzo climbed on Ceahlău Mountain and on the Sphynx on Bucegi Mountain (in 1968), to study these zoomorphic stones which represent animals from the tropical area (lions, monkeys, etc). He reached some extraordinary conclusions. Ruzo speaks about a legendary civilization from the depths of history (whether it was Hyperborea or not we do not know), which he calls a „proto-historic” civilization, which was destroyed by great planetary transformations and a catastrophe similar to the Biblical flood.

Ruzo found that in Romania there are zoomorphic and antropomorphic megaliths similar to those on the Marcahuasi plateau in Peru. (http://www.bcvideo.com/markawasi.html)

Ruzo said that the megaliths in Romania are connected to those on the Marcahuasi plateau in Peru. They were made by the same ancient culture, the Masma culture, according to Daniel Ruzo. The beings who modelled the megaliths could access states of extended consciousness and they had the ability to travel at enormous distances on our planet, through astral travel and bilocation. Why did they choose to build the megaliths at such a distance on different continents? Their choice must have been motivated by the energetic qualities of the mountains in the two locations on different continents.

Link to a film dedicated to Daniel Ruzo and the Romanian megaliths on You Tube:

Ruzo made a documentary which was presented twice at the famous Scala cinema in Bucharest, but the communists realized that the information in the documentary would lead to a change of paradigm and decided to forbid the documentary. Ruzo was banished from Romania. The documentary would have opened people’s minds, and people with an open mind are more difficult to control and manipulate.

The megaliths are proof that the protohistoric cultures were not as primitive as it is believed. They possessed a spiritual technology, not an external mechanical technology like ours. They were connected to the stars and to the higher dimensions and were able to travel through bilocation and astral travel. We must also mention that in those times the physical laws and the aggregation of matter were slightly different, because the planet Earth was in a higher dimension.

Decades ago on Mountain’s day on Ceahlău Mountain, people used to climb on Toaca Peak dressed in traditional clothes with their long horns, to pay homage to the spirit of the mountain. They climbed on top of the mountain and blew their long horns. The Mountains’s day on Ceahlău is celebrated on August 6, when the holographic pyramid is formed. On top of Toaca Peak, where the old men used to blow their horns and the wooden semantron was beaten, the communists built a meteorological station, a monument dedicated to technology. And the ancestral spirit of the mountain stopped being worshipped the way the ancient Dacians used to worship it.

But human beings have a deep need of the sacred. Lower on the mountain, after the fall of communism a monastery was built, and crowds of people come there every year on the Mountain’s day, to pray in the Christian way. But the Christian way does not understand the megaliths.

Where is the ancient attitude of respect for the sacred character of Mother Earth? Right next to the sacred megalith of the Ram on Ceahlău, we saw a garbage mound! Plastic, pollution and lack of respect suffocate our civilization! 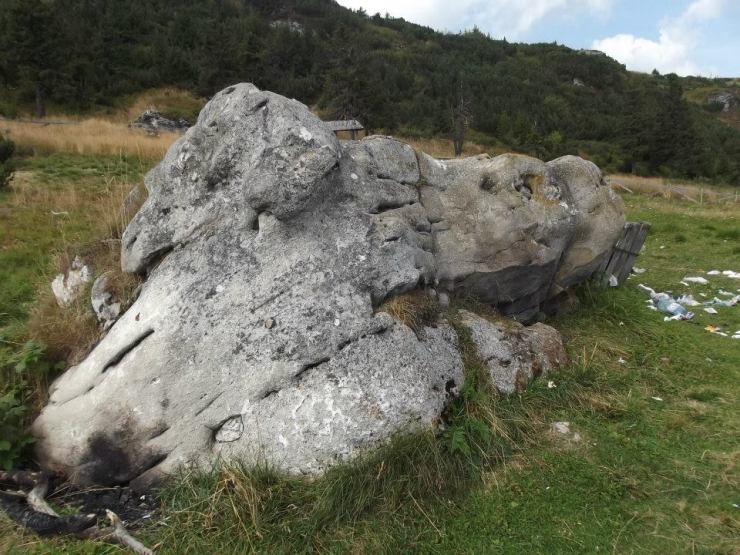 People should walk respectfully on Ceahlău Mountain. These megaliths are informed like crystals. If you connect to the information uploaded in them, this will raise you up, it will connect you to the ancestral spirit of the land, to the sacred character of life. A correct understanding of the megaliths will connect you to Spirit. It will change your paradigm, integrating you into a larger cosmic perspective!